But not when it comes to ACS’s favourite alternative fashion spirit animal. British-born musician and writer, who has long been a champion of personal style through every phase of her career, tends to take the opposite approach, and that’s what makes her such an unexpected inspiration.

From ubiquitous slip dresses, a twisted pinup look in the ’90s and metallic mini dresses to the smudgy stage makeup and subversive glitter, there’s one woman who sums up uninhabited personal style: PJ Harvey.

Harvey has a unique way of breaking out of the traditional set of “fashion rules” set by the industry, publications, past fashionistas or even your most eccentric aunt. 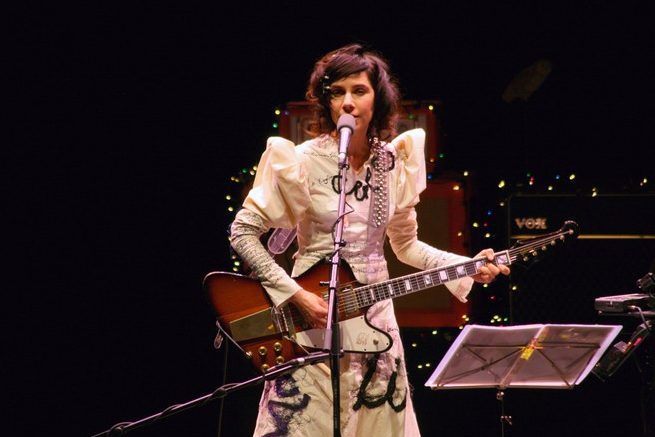 Her penchant for extravagant headpieces paired with ethereal gowns has made her one to watch on stage. It’s also the company she keeps that inevitably plays an evolutionary role in her ever-changing fascinating style, counting the likes of designer Ann Demeulemeester and New York legend Patti Smith as friends.

Harvey’s own muse-dom extends beyond her wardrobe; arguably the singer operates in a way that mimics the fashion system itself. Harvey changes tack with each album, much as designers do season to season.

Since she started her career in the late 1980s, her look has continued to evolve. Her influence extends beyond what she wears to what she stands for.

A woman, in a man’s world, she has consciously played with her femininity from the start – snaps for PJ Harvey.

The art of protest